In 2012, Forgirlsake raised $15,400 to help build the only girls’ school at the Kakuma Refugee Camp. This ambitious project began in 2011 by Canadian company, Morneau Shepell, with the goal of raising $720,000 to open the school in 2013. Thanks to our many supporters, and Morneau Shepell’s matching donation, Forgirlsake helped make this happen.

The Kakuma Refugee Camp, established in 1992, is located in a remote region of North-Western Kenya. There are about 74,000 school-age children, but fewer than one in four reach secondary school. For girls the odds are even worse — only one in 10 makes it to high school. Traditionally, girls are removed from education early to help with domestic chores or to be married while still teenagers to earn lucrative dowries for their parents. There are many safety concerns for young women in the camp, including high rates of rape, prostitution and HIV, as well as arranged marriages for girls as young as 12 years old.

Education was elusive for many girls, but the new boarding school has provided many of them with a safe learning environment.

What’s happening now?
The MSSSG opened its doors in 2013 and 340 girls are now attending. Esther Nyakong, 18, is one of them, and is on track to complete high school in 2017. Her goal is to be the first South Sudanese female neurosurgeon. She and her schoolmates are shown here attending a computer literacy class. For more information, visit www.unhcr.ca 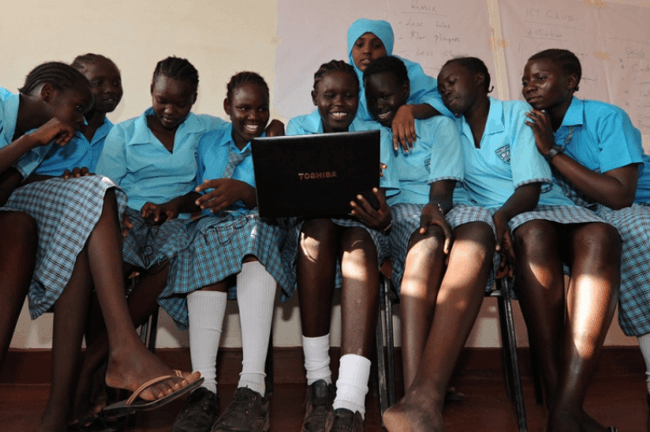